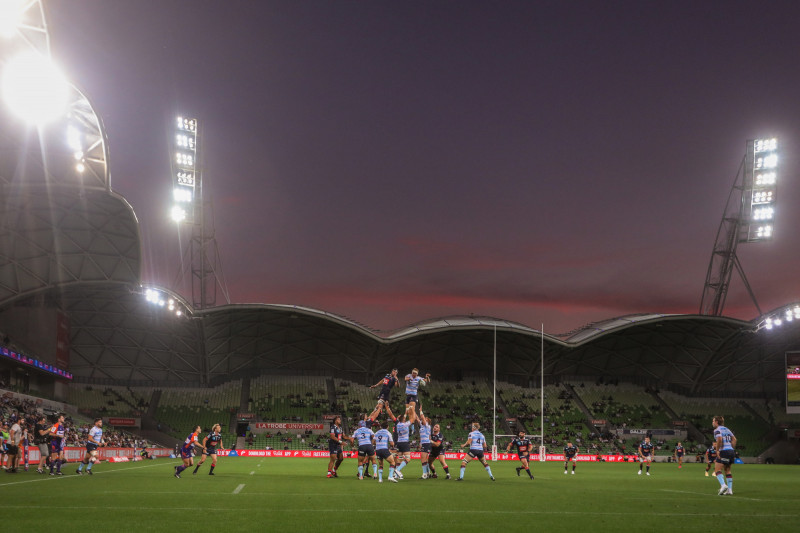 Super Rugby Pacific will create history at AAMI Park in Melbourne this ANZAC weekend when 10 of the 12 teams ignite new and old rivalries in the one location for Super Round Melbourne presented by Fiji Airways.

Unfortunately, the planned 12-team, full six-match round at AAMI Park will not be possible due to COVID-19 impacts on the Western Force playing squad which has led to their match against Moana Pasifika on Friday 22 April being postponed. The Chiefs versus Waratahs match that night will now kick-off at 19:00 at AAMI Park (amended from 18:00).

Nonetheless, the Super Round will provide a unique opportunity for rugby to also celebrate the ANZAC spirit and the final match of Round 10, between the Crusaders and Rebels on Sunday 24 April, will feature the traditional reading of The Ode, playing of The Last Post and a moment's silence to remember the servicemen and women who made the ultimate sacrifice for their countries, including many of Pasifika heritage.


Rugby Australia Chief Executive Andy Marinos said: “It has been long-awaited; I know our teams, fans, and the wider Rugby community are excited to kick-off the inaugural Super Round in Melbourne. The weekend’s fixtures will mark a competition first, and they will see our teams play against New Zealand franchises for the first time since the 2021 Trans-Tasman competition."

“As we kick off this weekend, it marks the home stretch of the Super Rugby Pacific competition, and with four of our five Australian teams in the top eight, each side will be looking to build on their success as the finals series approaches."

NZR General Manager Professional Rugby & Performance Chris Lendrum said, “COVID restrictions have meant we’ve seen nine exciting weeks of rugby played on different sides of the Tasman, but everyone is intrigued to see how the New Zealand-based and Australian-based teams measure up against each other. Super Round will be crucial to the aspirations of teams and their fans as the race to make the top-eight intensifies."

Informaton on Tickets for the Super Round presented by Fiji Airways in Melbourne is available here.

The weekend will also see the culmination of the 'Tries for Tonga' fundraising initiative that has seen New Zealand Rugby (NZR) and Rugby Australia (RA) team up with their respective broadcast partners, Sky and Stan Sport/Nine to donate $500 per try to the New Zealand Red Cross Pacific Tsunami Appeal during the first 10 rounds of the competition.

305 tries have been scored during the first nine rounds of Super Ruby Pacific and the player who scores the final try of the Super Round, presented by Fiji Airways, will present a cheque to a Red Cross New Zealand representative following the final whistle on Sunday evening. In New Zealand naming rights partner DHL kickstarted 'Tries for Tonga' with a $20,000 donation in Round 1 and the 23 tries scored during the inaugural season of Sky Super Rugby Aupiki will also be included in the final donation; along with fundraising efforts undertaken by the Rugby community in Australia.

New Zealand Red Cross Secretary General Sarah Stuart-Black said, “Our funds have already supported the Tonga response and will continue to support ongoing recovery efforts. Any response and recovery effort following a disaster is complex and takes time. This is especially true for Tonga, which, on top of the eruption and tsunami, is now also in the midst of its first significant COVID-19 outbreak. We’ve been working closely with Tonga Red Cross on how we can best help them recover. Thank you for the generosity of those who donated to Tries for Tonga and to the wider appeal.”