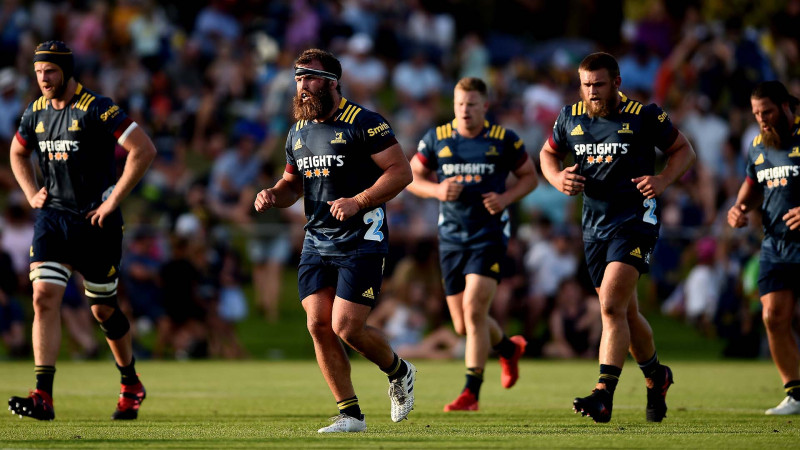 The Highlanders have assembled their team for the brand new Super Rugby Pacific competition in 2022. The 38 man squad features 22 forwards and 16 backs and is set to take on the best of Australia, New Zealand and Pacific Islands.

The 24-year-old Caird was a NZ U20 player in 2016 and 2017 and was with the Chiefs and Blues wider training squads before heading across the Tasman to play the 2021 season with the Waratahs. At 2.02m and 118kg his physical attributes will be welcomed by the Highlanders pack after losing giant lock Pari Pari Parkinson to a knee injury. He will join last season’s middle rowers Bryn Evans, Josh Dickson and Manaaki Selby-Rickit

Up and coming players Mau and Withy have come through the Highlander’s High Performance programme and Max Hicks displayed promising form for the Mako during the Bunnings NPC  Premiership competition.

The 22-year-old Hicks made his provincial debut for Tasman this season, he is a former NZ U18 AFL player and was a member of the Championship winning Rosmini College First XV in 2017. He has spent time with the Blues U20s and Crusaders Development teams prior to his Tasman Mako debut and at a tick under 2m (and very mobile) he will provide cover for the blindside and lock positions.

An All Black in 2018 Evans is returning to the Highlanders after having played 44 games between 2014 and 2017 he will team up with his brother Bryn whom performed well at lock during the 2021 Super Rugby season. Openside flanker Billy Harmon is not expected back from injury until the middle rounds.

The Highlanders most capped player Aaron Smith headlines the backs and along with experienced pivots, Mitch Hunt and Marty Banks, will provide plenty of direction. A strong midfield includes Thomas Umaga-Jensen, Fetuli Paea, Scott Gregory, Ngatungane Punivai and Patelesio Tomkinson. There are plenty of options in the back three with Solomon Alaimalo, Connor Garden-Bachop and Otago players Sam Gilbert at fullback and Vili Koroi at wing. Koroi will also provide cover at first-five.

The only newcomer in the backs is 23-year-old Waikato winger Mosese Dawai. He has already notched up five tries for the Bunning NPC Premiership finalists . A powerfully built speedster he will add pace and strength on the edge of the Highlanders attack.

Highlanders Head Coach, Tony Brown, is excited with the team his coaching group have been able to assemble; blending youth, talent and experience.

“We’re really looking forward to taking on Super Rugby Pacific with this team, we have some good experience up front, good playmakers in the backs, and good size and pace mixed throughout the squad ”.

“It’s going to be a short preseason so it’s good to have so many guys familiar with how we do things returning in 2022, we will obviously need to hit the ground running” said Brown.

The team will be captained by veteran halfback Aaron Smith.

Aaron Smith to rejoin All Blacks in Dublin