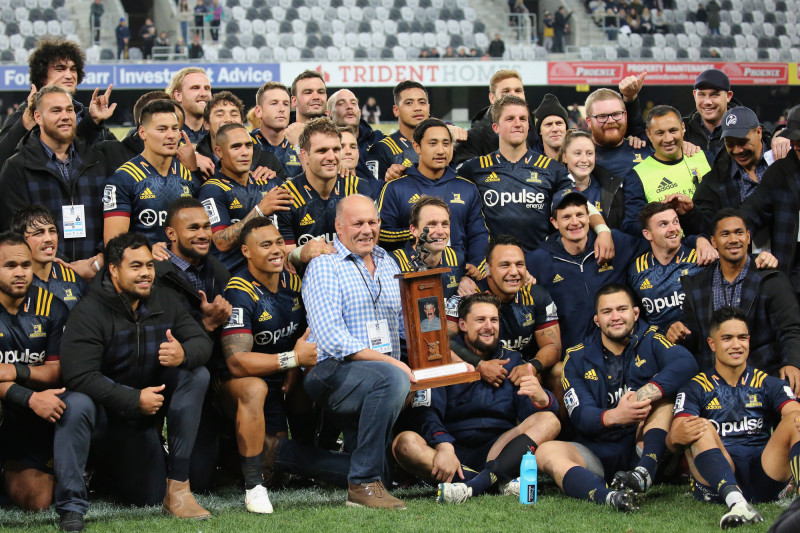 This weekend against the Blues in Auckland alongside playing for points in Super Rugby Pacific Competition the Highlanders will also be playing for the Gordon Hunter Memorial Trophy.

Gordon Hunter coached teams from both Highlanders and Blues Clubs. Hunter was the Highlander’s inaugural coach in 1996 after building a strong reputation coaching Otago and following a move to Auckland in early 2000, he became the Blues coach for that year. Prior to become a Super Rugby Coach Hunter spent four years as an All Blacks Selector in the mid 1990s.

In 2002 Hunter sadly passed away after a battle with cancer.  He was a coach who was loved by all who played for him and one of those players was current Highlander’s Head Coach, Tony Brown.

Tony Brown said, “he was awesome to play under and had a lot of respect from the players, all the players loved him and naturally as a new guy coming into the team you just wanted to play as well as you could to make him proud for selecting you. He was very loyal and once you earned his trust, he was very loyal back.

He played a style of game that was unique in New Zealand at the time, built around speed and skill that allowed players, no matter if they wore number 1 or 15 to play the game they loved a certain way. He shaped the way I coach the game now; I think all the coaches I’ve had have had some little impact, but definitely Gordie. He was a team first man and someone that was super loyal to all his players and all his players loved him for it and performed for him.”

The two teams have been competing for the trophy since 2002 and it is played for at a home game of the current holder. While the Highlanders have the upper hand over the Blues with ten wins out of the 19 times it has been played for, it is currently held by the Blues after being won during Super Rugby Aotearoa in 2020.

The Gordon Hunter Memorial Trophy means a huge amount to both teams and will ensure a hard-fought battle occurs at North Harbour Stadium on Friday night.