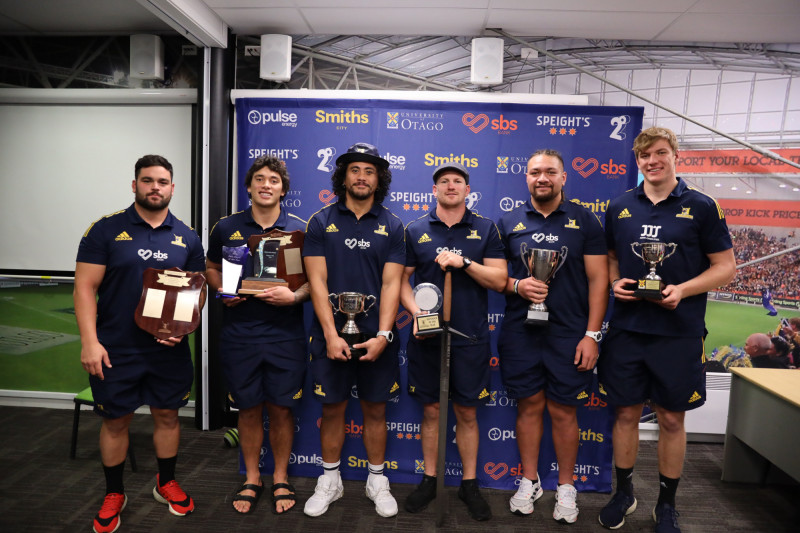 The Highlander’s team of 2022 signed off their season with their annual awards presented at a team prizegiving held at the Highlander’s offices. The traditional gala night occasion involving sponsors and players partners being cancelled due to viral illness in the community.

The hardworking gentle giant, Saula Ma’u, was awarded the Rookie of the Year in his Super Rugby debut season where he made nine appearances for the club and held his own as a 22-year-old in the front row. An imposing human being, Ma’u, has overcome both a shoulder and knee injury in consecutive years to return to full fitness to be available for selection and fight for a spot in the playing team each week.

19-year-old Dutch-national, Fabian Holland, was awarded the University of Otago U20 Player of the Year. Holland moved to New Zealand as a 16-year-old to pursue his rugby dream and has been a member of the Highlander’s High Performance Programme since 2021. The towering 2-metre lock not only played for the Highlander’s U20 Team at the Super Rugby Next Gen Tournament in Taupo but also made two Super Rugby appearances for the Highlanders. The second of which was made even more special by the presence of Holland’s family who hadn’t seen their son and brother since he came to New Zealand four years ago.

Jermaine Ainsley took out the battle for Forward of the Year. Ainsley spent 2021 on the side-lines and had to bide his time to pull on the Highlanders jersey but since his debut in round one he was unstoppable. A dominant and powerful prop, Ainsley played in 13 out of 15 games – racking up almost 700 minutes – taking his claim as the go-to tighthead prop.

Thomas Umaga-Jensen had an outstanding year and received three awards. After joining the Highlander’s in 2018 Umaga-Jensen had a horror run with injuries, however, his 2022 season saw him play 11 games, almost equalling the number of caps of the previous four seasons and become a formidable asset both on attack and defence for the Highlander’s. His efforts were recognised by the Highlander’s faithful supporters who chose him as their Dunedin City Motor’s Fan Player of the Year as well as the coaching team who awarded him the NZME Back of the Year award.

Umaga-Jensen’s third award recognised his impact on the team and his teammates. The Speight’s Players’ Player trophy was awarded an overwhelmed Umaga-Jensen who expressed his gratitude to his fellow teammates for their support of his journey.

Marino Mikaele-Tu’u was awarded the Pulse Energy Player of the Year for being the most valuable player on the field in 2022. After missing the 2021 Super Rugby Trans-Tasman Season through injury, Mikaele-Tu’u went from strength to strength in 2022. A rampaging runner with ball in hand, he had over 100 carries with an impressive 91% carry dominance and backed it up on defence with an equally impressive 87% tackle success rate.

The Club’s supreme award, The Highlander Man, went to Co-Captain, James Lentjes, who also picked up Defender of the Year with the highest number of tackles attended and an exceedingly dominant 89% tackle success rate.

Highlander’s CEO, Roger Clark, said, “While the season was hardly satisfactory from a results perspective, this year has seen some outstanding individual performances and being able to acknowledge those player’s and performances was important and a great way to end the year. We’ve got some amazing talent here and I’m excited for what our future holds.”

Forward of the Year – Jermaine Ainsley

NZME Back of the Year – Thomas Umaga-Jensen

Defender of the Year – James Lentjes

University of Otago U20 Player of the Year – Fabian Holland

Rookie of the Year – Saula Ma’u