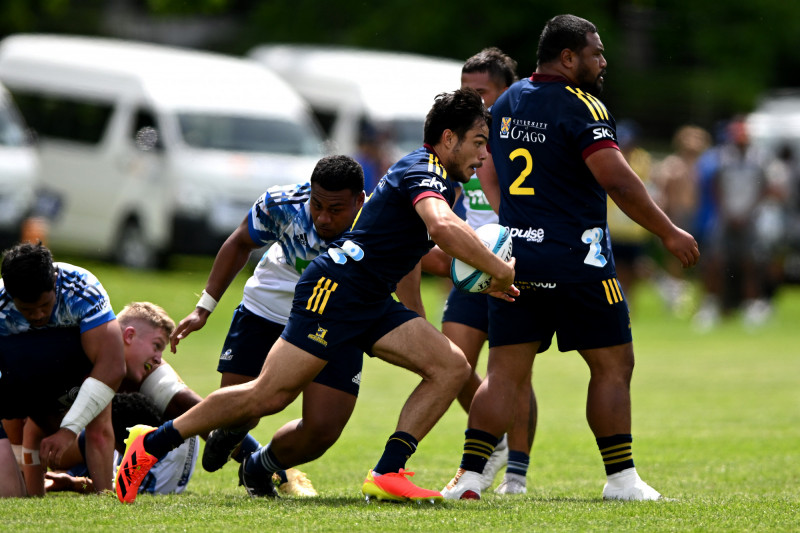 Highlanders named for first match of the season in Queenstown

The Highlanders have named their first team of the DHL Super Rugby Pacific season. They will be playing the Chiefs on Saturday at 4:35pm in Queenstown.

The team have finished their second week in the Queenstown Super Rugby Bubble and recovered well following the Game of Three Halves over the weekend against the Chiefs and Blues.

Shannon Frizell will run out for his 50th Highlander’s game this weekend. Frizell debuted for the club in 2018 following two strong seasons with the Tasman Mako. Since joining the club he has been a massive contributor to the team scoring 17 tries throughout his 49 games to date. His performance was rewarded by being selected for the All Blacks in 2019, he has since played 17 tests for them.

Highlanders Head Coach Tony Brown said, “Shannon has made an impact on the field from the moment he first arrived here. He’s a strong ball carrier and has been one of our most consistent forwards over the last few seasons. His selection for the All Blacks is a well-earned reward for a lot of hard work put in on the training field. No doubt he will be looking forward to running out for his 50th match for a team he cares a lot about.”

Jermaine Ainsley and Fetuli Paea will both have their long-awaited debuts for the club this weekend.  Both players missed the full 2021 season due to injury.

Josh Timu and Mosese Dawii are also set to debut; this will be Timu’s first full season of Super Rugby in New Zealand after playing for the Sunwolves in Japan and then for the Crusaders as injury cover in 2021. Mosese is in his first season at Super Rugby level, the Fijian born winger made his mark in the NPC Premiership last season with the winning Waikato team.

Excited to see what the debutants could bring to the game on Saturday, Brown commented, “Jermaine and Fetuli have both had to be patient and put in the hard yards behind closed doors to get to this point. I’m really excited to see them finally get their Highlander debuts on Saturday night and Josh has been in our camp for pre-season before but hasn’t had the opportunity to run out for a competition game. Being able to finally get his name up on the Highlanders board will mean a lot to Josh and his family.”

The game will be played behind closed doors again due to red light restrictions. However, it will be available to watch on Sky Sport 1.